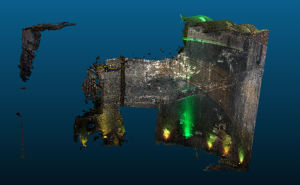 Dr. Mike Smith (Department of Geography and Geology, Kingston University) and Flora Parrott (Artist in Residence at the RGS-IBG Collection 2016 and Fine Art Department Kingston) invited students from both departments to respond to the concept of ‘Reading’ a landscape or an environment and to develop an individual method of collecting data.

Central to the collaborative work was the use of a site or location as a focal point: it would be viewed and analysed through the “lens” of each discipline. In doing so the group would have a new perspective on their methodologies, recognise parallels between what initially appear to be polar disciplinary approaches and understand how methods of teaching and learning can be expanded and challenged through collaboration between fields.

After an introduction to the brief in the Fine Art studios, selections were made from proposals submitted by the students and in March 2016 the group began to meet regularly to discuss methodologies and definitions.

A selection of potential sites were proposed and the Grand Entrance Hall to the Thames Tunnel at Rotherhithe selected. This chamber, on the banks of the Thames, was designed by Marc Brunel and opened in 1843. It is a space with visible traces of it’s past on the walls, an evocative interior, suburban, location starkly different from the surface level at which it is accessed. The group developed plans outlining how the wide-ranging ‘data’ might be collected and pooled in order to develop a collaborative response to the site.

On the field trip to the Grand Entrance Hall the group had limited time to collect their data. The techniques used included sound recording, frottage, pin-hole photography, plane tabling, photogrammetry, poetry and drawing.

“Whilst in the shaft I observed and recorded the different range of activities going on in the space. It seems the breadth and depth of different people’s interpretations and readings will be vitally important when reviewing our time there and trying to retell and interpret the space as we remember it.” Anna Monkman, Fine Art student

The day was energetic and dynamic, the students were fascinated and possibly slightly intimidated by each others’ techniques. The results were recorded on a blog (http://rotherhitheshaft.tumblr.com/) which became the foundation for a follow up workshop in the Stanley Picker Gallery in May 2016.

During the workshop we had the opportunity to reflect on the site visit. The students had become more familiar with each other by this point and felt more able to ask direct questions about the processes used in the space without feeling that lack of knowledge in another field was a barrier.

Fine Art practice encourages ‘thinking through making’ and so in this spirit the students worked on small tasks in break out groups for the afternoon. The tasks had no specific rationale but in carrying them out space for discussion was created. For example, one group took the results from the plane tabling and used them to map the Grande Entrance Hall at 50% scale in the gallery car park. During this time we overheard conversations between students about the importance of practical application and field work in both disciplines. Another task was to map a section of the 3D photogrammetretric model on to the wall in the gallery space using the point cloud data. The pipe from the wall was detached from the model and simplified – this became a pivotal discussion in the making of the final short film and also presented a challenge for PhD student James O’Connor who found new ways in which to work with technologies that he uses on a daily basis.

“Within computer science a very typical task undertaken is to try and structure data by dividing it’s contents into various groups sharing some common information (classification). In the case of the shaft, this task can be done manually as it’s not a huge amount of work, but during the discussions yesterday I noted a few people interested in the fact that science looks to always patch out errors, whereas artists can embrace them.” James O’Connor PhD Geography

This type of exchange, although difficult to quantify, helped both staff and students to deepen their understanding of their own approaches.

One of the most profound conversations to emerge from the site visit was around our own personal metrics and gauges and how they alter our perceptions of space. Leonie Rousham (Kingston Fine Art Foundation) instructed us all to measure our bedrooms prior to the field trip and to then reapply these dimensions within the Grand Entrance Hall using tape on the floor.

The non-exacting and elusive ways in which we a perceive space as individuals is the central theme of the short film. The ideas that we bring to bear, employ consciously and sub-consciously and merge to form our own set of parameters are key to our response at each and every location and that this is uniquely formed encompassing and employing the historical dimension that is embedding there. The tensions between these streams of information are what the project attempts to make transparent.

In the final meetings about the film, the group discussed the site and how to combine the readings; there was no sense of hierarchy or of ownership, it was simply about how best to communicate the sense of place and to include as much of the information as possible. There was very little discussion about the differences between Geography and Art practice, instead there was a sense of symbiosis and shared intent.